In her brave, honest and funny book, The Wisdom of Whores, Elizabeth Pisani kicks a lot of asses and sacrifices quite a few sacred cows “on the untidy altar of Reality”. First-hand facts and elementary maths are there to expose myths such as that AIDS is necessarily “a development problem”. Or that “more premarital sex translates into more HIV”. The myths that cost billions of dollars. And human lives.

‘I networked my arse off.’ — Participant in governance seminar.

Right, that’s what bosses do on conferences etc. “Do what’s necessary.”

When I will be a boss (which is an euphemism for “never”), I’ll make it mandatory to play buzzword bingo during meetings and seminars. Including external seminars. That will keep ’em awake. 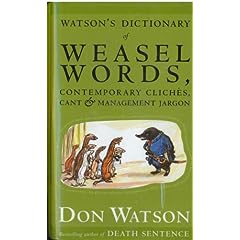 time (at this point in)
Now, then, before, earlier, later, next Wednesday, at the end of the day, etc.

‘But at the end of the day we have to say it is not appropriate at this point in time.’ (after
Alexander Downer); cf. ‘The whole life of man is but a point in time...’ (Plutarch)

‘At this point in time I lay me down to sleep.’

‘On a day like today,
We passed the points of time away.’

‘Excuse me, can you tell me the point in time?’

the fate of gurus

From The Ape and the Sushi Master

Instead of marching onward with perfect vision, science stumbles along behind leaders who occasionally take the wrong alley, after which it turns to other leaders who seem to know the way, then corrects itself again, until sufficient progress is made for the next generation to either thrust aside or build upon. In hindsight, the path taken may look straight, running from ignorance to profound insight, but only because our memory for dead ends is so much worse than that of a rat in the maze.

Not surprisingly, leaders are treated with ambivalence. With the exception of those who have come up with absolutely invaluable insights, such as Einstein and Darwin, leaders first inspire and stimulate, then guide and protect their followers, but usually end up stifling further progress. They become major obstacles: the dinosaurs of fields that they themselves helped create. Hence the ugly practices in which a number of upstarts revolt and get rid of old guru. They never do so literally, of course, but instead wield the academic version of the long knife, such as disparaging jokes during lectures, critical footnotes, bad book reviews, and after all is said and done, deadly silence.

Email ThisBlogThis!Share to TwitterShare to FacebookShare to Pinterest
Labels: books

Feynman looks at the blueprints

The Pleasure Of Finding Things Out

is a collection of Richard Feynman’s short works. Perhaps the most famous of these is his 1974 Caltech Commencement Address on Cargo Cult Science. My personal favourite there is Los Alamos from Below (slightly different version of this lecture appears here).


How do you look at a plant that ain’t built yet? I don’t know. So I go into this room with these fellows. There was always a Lieutenant Zumwalt that was always coming around with me, taking care of me, you know; I had to have an escort everywhere. So he goes with me, he takes me into this room and there are these two engineers and a loooooooong table, great big long table, tremendous table, covered with a blueprint that’s as big as the table; not one blueprint, but a stack of blueprints. I took mechanical drawing when I was in school, but I wasn’t too good at reading blueprints. So they start to explain it to me because they thought I was a genius.

And they start out, “Mr. Feynman, we would like you to understand, the plant is so designed, you see one of the things we had to avoid in the plant was accumulation.” Problems like — there’s an evaporator working which is trying to accumulate the stuff; if the valve gets stuck or something like that and they accumulate too much stuff, it’ll explode. So they explained to me that this plant is designed so that no one valve, if any one valve gets stuck nothing will happen. It needs at least two valves everywhere.

So then they explain how it works. The carbon tetrachloride comes in here, the uranium nitrate from here comes in here, it goes up and down, it goes up through the floor, comes up through the pipes, coming up from the second floor, bluuuuurp, from the blueprints, down, up, down, up, very fast talking explaining the very, very complicated chemical plant.

I’m completely dazed, worse, I don’t know what the symbols on the blueprint mean! There is some kind of a thing that at first I think it’s a window. It’s a square with a little cross in the middle, all over the damn place. Lines with this damn square, lines with the damn square. I think it’s a window; no, it can’t be a window, ’cause it ain’t always at the edge. I want to ask them what it is.

You must have been in a situation like this — you didn’t ask them right away, right away it would have been OK. But they’ve been talking a little bit too long. You hesitated too long. If you ask them now they’ll say, what are you wasting my time all this time for? I don’t know what to do. You are not going to believe this story, but I swear it’s absolutely true; it’s such sensational luck. I thought what am I going to do, what am I going to do????? I got an idea. Maybe it’s a valve? So, in order to find out whether it’s a valve or not I take my finger and I put it down in the middle of one of the blueprints on page number 3 down in the end and I said, “What happens if this valve gets stuck?” figuring they’re going to say, “That’s not a valve, sir, that’s a window.”

So they roll up the blueprints and away they went and we walked out. And Lt. Zumwalt, who had been following me all the way through, said, “You’re a genius. I got the idea you were a genius when you went through the plant once and you could tell them about evaporator C-21 in building 90-207 the next morning,“ he says, “but what you have just done is so fantastic, I want to know how, how do you do that?” I told him, you try to find out whether it’s a valve or not.